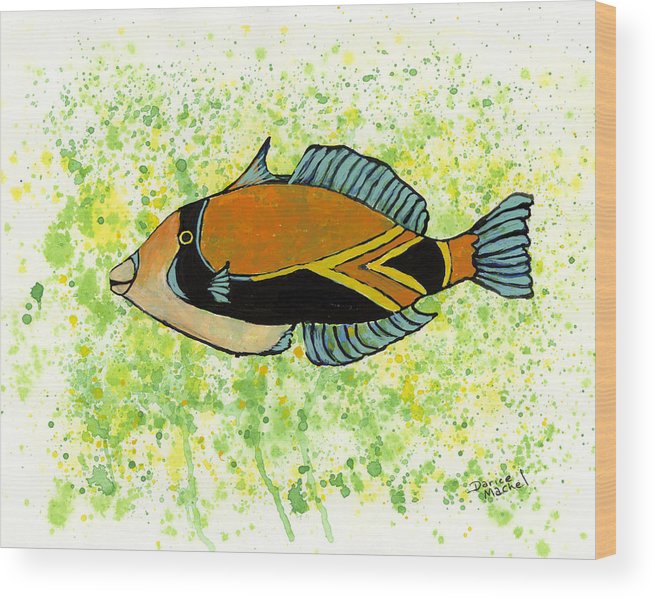 Humuhumunukunukuapuaa wood print by Darice Machel McGuire.   Bring your artwork to life with the texture and added depth of a wood print. Your image gets printed directly onto a sheet of 3/4" thick maple wood. There are D-clips on the back of the print for mounting it to your wall using mounting hooks and nails (included).

The humuhumunukunukuapua'a (reef triggerfish) was originally designated the official fish of Hawaii in 1985 but lost it's title in 1990. It then... more

The humuhumunukunukuapua'a (reef triggerfish) was originally designated the official fish of Hawaii in 1985 but lost it's title in 1990. It then became permanently reinstated on May 2, 2006 by the Governor of Hawaii. The Hawaiian name is one of the longest words in the Hawaiian language. It's also known as humuhumu, which is much easier to say. This painting was done on watercolor paper with acrylic paints. "Copyright 2014, Darice Machel McGuire, All rights reserved"

Darice Machel McGuire lives on the beautiful Island of Maui. Her Hawaii and California landscape oil and acrylic paintings are gracing the homes and offices of collectors nationally and internationally. McGuire's choice of subject matter comes from her love of nature and all that surrounds her on a daily basis. She paints in large and small formats. Her works are represented by Village Galleries in Lahaina, Karen Lei's Gallery in Kahakuloa, Karen Lei's Gallery in Ka'anapali, Kaukini Gallery in Kahakuloa, and Kingwell Island Art in Lahaina. All these locations are on the Island of Maui Maui. McGuire brings hands-on experience to her art. Her childhood years were spent shadowing her mother who is a fine art oil and watercolor artist and...